Adolescents need to be heard to ensure that health programs that serve them are reaching them effectively, according to Promoting Positive Adolescent Health Behaviors and Outcomes, a report released in December 2019 by the National Academies. Following its own advice, the committee that wrote the report recently hosted a listening session to discuss feedback from hundreds of adolescents across the country who weighed in on the report through our very own MyVoice:  A National Poll of Youth. The webinar featured three junior researchers from the MyVoice team: Tampa resident Jayde Frederick, 20, who plans to become a physician; Xochitl Amaro, 19, who lives in Chicago and plans to work in public health; and Abby Frank, 14, a high school sophomore in Ann Arbor who also wants to work in medicine. The National Academies AKA the National Academies of Sciences, Engineering, and Medicine (or NASEM) is the collective scientific national academy of the United States, an organization formed during the time of President Abraham Lincoln. NASEM acts as advisors to the nation on science, engineering, and medicine.

Having the opportunity to participate in a variety of youth programs has largely been a positive experience, exposing them to mentorship, future career options, and new ideas, the young women agreed. “It’s really eye-opening and helps you know what you want to do,” Jayde said.

All three emphasized that the best programs let them interact with whatever subject or skill they were exploring. “I personally connect with people and stories … the best speakers are people that share their journey and the struggles they went through,” said Jayde, who expressed how she was inspired by a doctor who spoke at a high school program about her experiences — including how she dealt with obstacles in school and sexism in the workplace. “She made me think, ‘If she can do it, I can do it.’”

How Can Youth Programs Be Better?

“Youth have a lot to say, especially about things that affect them.” — Xochitl Amaro, 19, Chicago

Giving youth a role in designing and giving feedback on programs can make them better. “Youth have a lot to say, especially about things that affect them,” said Xochitl, and programs could do a better job of reflecting what young people actually want to get out of them. Abby added, “All these programs are formed by adults, and I think it’s really important that those adults don’t assume they know what kids want those programs to be.”

They also emphasized the value of honesty and openness. “Lots of programs assume you don’t want to know everything, and keep the worst stuff to the side,” Abby said. She recalled how last summer she visited a retirement home as part of a volunteer program, and she met a woman with Alzheimer’s who repeated the same story over and over. “I wish that afterwards the program directors explained how to be supportive and respectful … but instead we just moved on to the next project.” Xochitl agreed: “When these programs are honest about what it’s really like to be in these situations … it can be an eye-opener to see that what you thought you wanted to do isn’t really what you wanted to do.”

Inclusivity is another trait that can improve youth programs. Xochitl said, “Accessibility is something that’s really important to think about,” and it was factor that had impacted her own experiences. Jayde said that she valued the opportunity that some programs had given her to meet people from different backgrounds, perspectives, and opinions. “Even if you didn’t agree with what someone was saying, I was glad they were there to show me why they think that way.”

Can Taking Risks Be a Good Thing?

The most effective adolescent health programs treat risk-taking as normal, according to the National Academies report. Programs should help youth learn the difference between healthy and unhealthy risks, and develop the skills to deal with those situations.

In feedback through the MyVoice program, the committee heard from youth that the word risk usually carries a negative connotation, and that choosing a different phrase like “opportunity” or “new experience” could clarify the report’s finding.

Abby thought using the word risk is important, because “either way, it’s a learning opportunity, whether it’s a healthy or unhealthy risk.” Jayde pointed to media portrayals of risk as consistently dangerous or unhealthy for young people, and said, “It’s our job to change that, and promote the narrative that risk is not always a bad thing.”

Jayde added that “being able to come to your own conclusions or come to a different opinion from someone,” especially your family, can be a healthy risk in adolescence. Abby said she took a new risk just that morning: “I started learning Mandarin today, because I decided I wanted to be able to speak with my best friend’s parents, who don’t know English.” They said the COVID-19 pandemic in many ways had forced them to take risks with their routines and try new things as their lives changed abruptly, such as new exercises or spending more time with friends outside.

Without efforts to meaningfully engage youth, it is too easy for youth programs to miss the mark, noted Tammy Chang, a practicing physician and health services researcher at the University of Michigan and member of the committee. “Youth are experts of their own lives and experiences, and having the opportunity to listen and learn from them during this session was unique, important, and should happen more often.”

What was it like to work with the National Academies?

We asked Jayde, Xochitl, and Abby what it was like to be featured guests at the National Academies:

“It felt really refreshing to be able to discuss topics that are so important but not nearly talked about enough, especially with people who have such a wide variety of perspectives and experiences.”

“Being a part of the listening session was an amazing and empowering experience because I felt like I had the chance to speak up for youth and their futures. ”

“It was an honor to be a part of such a valuable program.”

We also asked: In your ideal world, what other organizations would you like to see reach out to MyVoicers like you for input or are there specific issues that you think are missing out on young people’s perspectives?

“I think it would be quite interesting for MyVoice to collaborate with Planned Parenthood. I feel like youth perspective on the impacts of teen pregnancy is often overlooked and overshadowed by the views of adults.”

“I think that in today’s world especially, there are tons of issues that could use the input of youth! With so much uncertainty in the education structure right now, I think that it’s important to ask youth how they have felt in the last few months and how schools could make better accommodations to provide a more stable and effective learning situation. I think that social justice and the current state of society is something that a lot of youth are very passionate about.”

“I would love to see organizations such as local government, and school boards reach out to MyVoicers to get their input.”

About Jayde, Xochitl, and Abby 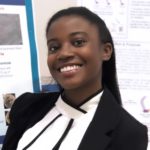 Jayde Frederick, 20, is a pre-med student at Oakwood University in Huntsville, Alabama and aspires to attend medical school to become a physician. In her spare time, she enjoys reading and drawing as a freelance artist. Her goal is to inspire as well as mentor young women to follow their passion in pursuing STEM-related fields and to use their knowledge as a way of giving back to their communities.

Jayde joined the MyVoice team as an intern this past summer, Jayde led analysis of a dataset on youth perspectives on online learning and working during COVID-19. Aspects of her work have been transformed into a report, editorial, and paper published in the Journal of Adolescent Health, and other forthcoming works. 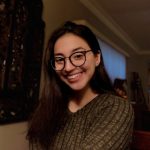 Xochitl Amaro, 19, is a student at the University of Michigan and is interested in studying Public Health. She joined the MyVoice team in October of 2019 as a member of the Undergraduate Research Opportunities Program, and she hopes to pursue a career in the medical field working with youth. In her spare time, Xochitl enjoys playing with her dog Kane, watching movies, and baking.

As a member of the MyVoice team as an undergraduate research, Xochitl helped to developed survey questions and analyze of datasets focused on Voting, Breastfeeding, and the COVID-19 Pandemic. She is currently leading a team that is focusing on Social Concordance in Healthcare, where she is working with other students and faculty from the University of Michigan. 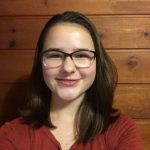 Abby Frank, 14, is a student at Community High School in Ann Arbor. She has been interested in medicine for years and hopes to become an OB/GYN. In her free time she loves to cook, paint, help others, and spend as much time outdoors as possible. Abby has been been working on coding COVID-19 dataset responses. She has also participated in survey question writing and dissemination of MyVoice research.

Find an earlier version of this press release from the National Academies and download the NAM report highlights for youth.